Turning over a New Leaf and Leafing through a New Book

It’s been a few months since I posted here…  another year has nearly passed and the world is already calling time on 2018.  I stand in a minority but Winter and Autumn are my favourite seasons.  The world has had its work for another year and deserves its rest.  Between the mistletoe and mince pies that Christmas brought, I did manage to spend a few days with a good book that turned out to be a solid and gripping read.

I have probably been reading Clive Barker since before I did Higher English.  His prose is rich and his plots are well-conceived and hauntingly surreal.  That said, it’s been some time since I picked up one of his books though I spotted The Scarlet Gospels amongst his many other tales in Waterstones.

I thought this was a new one and in relative terms it is.  Hitting bookshelves in 2016, it’s the latest revelation in the Hellraiser anthology and glimpses a further evolution of the villain’s (Pinhead’s) schemes.  Quintessentially Barker, The Scarlet Gospels paints a vivid and familiar world, where the problems and preoccupations of Hell and Earth seem grotesquely-familiar.

With a motley crew of accomplices, our main character, Harry D’Amour, must venture into the deepest and inauspicious reaches of Hell to rescue his closest friend, a woman whose lack of sight brings her intense visions of the dead.

But we find Hell not as we expect it.  Cruel and unnatural, it is presented as an industrious realm, with a civilisation that rivals many of humanity’s achievements.  We also find a society thrust into a civil war of Pinhead’s dealing, where the Devil is cast as the anti-hero of the book.  Naturally, in his characteristic style, Barker has also woven in many sub-plots, -themes and -texts into this book, which effortlessly buttress and galvanise the central story.

Deeply reminiscent of Barker’s earlier works (e.g. Weaveworld, Imajica), The Scarlet Gospels is a darkly-festive and engaging read – it certainly belongs on the Kindle or shelves of any fan of horror or fantasy fiction.  And if you need a second opinion, have a look at the review the British Fantasy Society gave it! 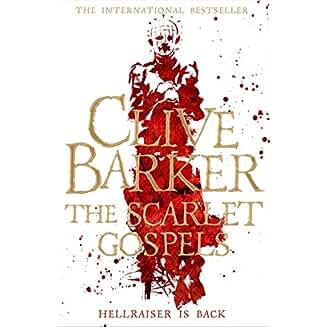